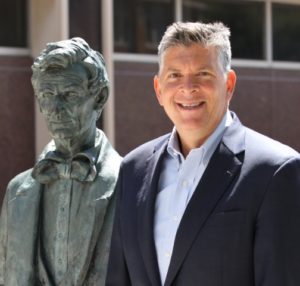 Congressman Darin LaHood, born and raised in Peoria, serves the constituents of the 18th District of Illinois. Sworn into the US House of Representatives on September 17, 2015, LaHood quickly transitioned into office after his special-election win on September 10. He won re-election to serve his third full-term in Congress on November 3, 2020, defeating his opponent with 70-percent of the vote.

Prior to his election to Congress, LaHood served four years in the Illinois State Senate, beginning in 2011. LaHood spent more than nine years as a State and Federal Prosecutor. From 2001-2006, he worked for the U.S. Department of Justice as an Assistant United States Attorney in Las Vegas, Nevada. LaHood has also served as an Assistant State’s Attorney in Cook County and Tazewell County. From 2006 up until his election to the House of Representatives, he practiced with the Peoria law firm of Miller, Hall & Triggs.

LaHood is one of three Lebanese American Members of Congress, and co-chairs the US Lebanon Friendship Caucus. Congressman LaHood’s great-grandparents immigrated to the United States from the village of Aitou in Northern Lebanon. The U.S. is home to over 14,000 immigrants from Aitou, many of whom live in Peoria, Illinois. The greater Peoria, Illinois area is home to over 8,000 Lebanese Americans, one of the largest Lebanese populations in the country.

LaHood currently serves on the House Ways and Means Committee, which is the House’s oldest committee and has jurisdiction over all taxation, trade and tariffs, and other revenue-raising measures. He serves on the Ways and Means Subcommittees on Tax Policy and Oversight. In March of 2021, LaHood was appointed by House Republican Leader Kevin McCarthy to serve on the House Permanent Select Committee on Intelligence. The committee oversees the nation’s intelligence agencies including components of the Departments of Defense, Homeland Security, Justice, State, Treasury and Energy.

LaHood, a third generation Peorian, graduated from Spalding High School. He earned a B.A. from Loras College and holds a J.D. from The John Marshall Law School. Congressman LaHood and his wife Kristen currently reside in Dunlap and are the proud parents of three sons, McKay, Lucas, and Teddy.