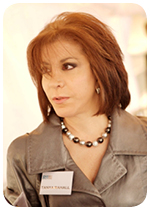 Tanya Rahall is Managing Director of RTK Consulting Group LLC. Ms. Rahall specializes in public and government relations primarily for energy-related companies, domestic organizations and foreign government and business interests. She has extensive experience with the U.S. Congressional legislative process and particular expertise with the Congressional authorization and appropriations process.

Ms. Rahall’s career began with federal election campaign work and is ongoing today. Her campaign work subsequently shaped her career in government work and consultancy. While serving as a Staff Member for the U.S. House of Representatives Committee on Education and Labor, she was recruited to the position of Director of Grassroots and Government Relations for a 50,000 + member trade association focused on U.S. – Middle East relations. Subsequently, Ms. Rahall co-founded and directed the American Task Force for Lebanon (ATFL).

These experiences led her to private practice representing a diverse clientele, both domestically and internationally based. In addition to advising several immigration clients, she has served healthcare and energy related clients. Ms. Rahall has served as the public and government relations consultant for the Ministry of Foreign Affairs for the Embassy of the State of Qatar. During this time, she established the 50-member Congressional Caucus for Qatar; obtained passage of a joint House/Senate resolution commending the Emir for his work on reform; and managed a Caucus Reception honoring the Emir, as well as Congressional delegations to Doha and the Middle East region.

Additionally, Ms. Rahall has served as the consulting Public Relations Director for the Ministry of Information for the Kingdom of Saudi Arabia, an Advisor to the Saudi Arabia Committee on International Trade and as a Consultant to the “Friends of Saudi Arabia”. Restaurant Holdings, one of the most successful international real estate development operations in the U.S., Europe and the Middle East has also retained the services of Ms. Rahall for communications work, as have various institutions in Central Asia.

Ms. Rahall has been sought to incorporate numerous non-profit organizations. She directed external relations for Layalina, which was founded by the late Ambassador Richard Fairbanks in 2002 for the purpose of combating violent extremism. She successfully built and directed The American Foundation for St. George Hospital, the Makassed Foundation and the Stream of Hope Mission. She co-founded and serves on the Executive Committee of the ATFL, the US-Lebanon Policy Council, the Board of the Rene Moawad Foundation USA, the International Advisory Committee of the National Council on US Arab Relations (NCUSAR), and the Board of the International Foundation for Women’s Empowerment.

Ms. Rahall has been an occasional guest of the White House, most significantly for meetings in the Oval office with Arab-American leaders; a State Dinner for His Excellency Prime Minister of Israel Ehud Barak, a State Dinner honoring His Majesty the former King Hussein of Jordan and two historic occasions for the signing of the Israeli-Arab Peace Accords.

She is a licensed realtor and investor in the District of Columbia, Maryland and Virginia.