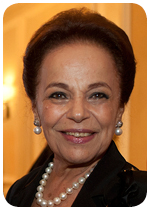 Nayla Moawad started her political career in 1991. She has been one of the pillars in her country for the fight for human rights, rule of law, freedom of expression, social justice and good governance. She campaigned strongly for women’s and children’s rights and has opposed political corruption. She is an avid campaigner for political reforms and for the building of a modern, democratic, and sovereign nation state. She was a member of Parliament and appointed in 2005 as Minister of Social Affairs. As a member of the National Assembly, Mrs. Moawad represented the Zgharta-Tripoli constituency in northern Lebanon. She has served on numerous parliamentary committees, specializing in such diverse fields as finance, children’s rights, and education and passed important legislations affecting their lives such as as the Law increasing the age of working children from eight to fourteen years and establishing free compulsory basic education in Lebanon. She is the Founding member of many political groups like Kornet Chehwane and the Democratic Forum.

Nayla Issa El-Khouri was born in Bsharri, Lebanon, as the daughter of Nagib Issa El-Khouri and Evelyne Roch. Her father was the scion of a prominent Maronite Christian family and a relative of Bechara El Khoury, Lebanon’s first post-Independence President. She graduated from Saint Joseph’s University with a B.A. degree in French Literature and History. She later studied English at Cambridge University in the United Kingdom.

From 1962 to 1965, Mrs. Moawad worked as a journalist for the daily newspaper, L’Orient. In 1965, she married Rene Moawad who was elected as the President of Lebanon in 1989 and was assassinated two months thereafter. Their marriage produced a daughter, Rima. LLM, Harvard University. Attorney at law at Proskauer Rose, New York.- A son, Michel who received his Law degree from the Sorbonne University Paris and an MBA, HEC Paris. He heads a Lebanese based trading company, Mobile Age- and is politically active in Lebanon.