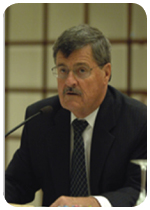 Hon. Vincent Martin Battle was the United States ambassador to Lebanon. He also served in Bahrain; Syria; Oman; Egypt and Haiti. Vincent worked at the Bureau of Near East Affairs in Washington, D.C. and was Chief of the Senior Level Division in CDA at the U.S. Department of State.

Prior to entering the U.S. Foreign Service, Mr. Battle worked in Uganda, Pakistan and Libya. He received his BA from Georgetown University; his Masters and Ph.D. from Columbia University.

Vincent is a member of several organizations including the Lebanese American Chamber of Commerce in Beirut. Well-versed in Middle Eastern Affairs and after spending more than three decades in the region, he is now settled in Lebanon where he is spending his retirement.