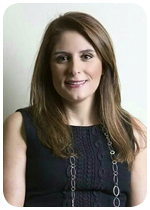 Ms. Lina Jazi Chehab is the President & CEO of Terra Nova Consulting, Inc., an environmental consulting firm based in Houston and New York. She founded Terra Nova in 2011 as a spin-off from Environmental Consulting Services, Inc. (ECS) that she co-founded in 1995, to focus on environmental sustainability. ECS was featured as one of the fastest growing environmental companies in 1999, 2000, 2001 and 2008. Ms. Jazi Chehab was featured as a success story in the Houston Business Journal in 1999 and 2005, and by the Small Business Administration Houston District in 2009. She was also featured in the Houston Business Journal in 2013 as an expert on the impact of oil and gas exploration on the environment.

Ms. Jazi Chehab is an avid advocate of education, children causes, and environmental sustainability. She is actively involved with several universities and educational not-for-profit organizations. She is a founding member of the International Advisory Council of the Faculty of Health Sciences at the American University of Beirut (AUB) and serves on the Advisory Board of the Institute for Women’s Studies in the Arab World at the Lebanese American University (LAU). She has also been a strong supporter and promoter of AUB and served in different capacities on the Board of Directors of AUB’s Alumni Association of North America between 2001 and 2008.

For several years, Ms. Jazi Chehab acted as the Vice-President of the Arab-American Educational Foundation based in Houston, and served on the City of Houston Mayor’s International Affairs & Development Council.

In 2011, Ms. Jazi Chehab revived Act for Lebanon, a NY-based non-profit organization aiming at strengthening civic institutions in Lebanon through educational, cultural, athletic and health-related programs, by connecting donors in the US to non-profit charitable organizations in Lebanon. She currently serves as the President of Act for Lebanon and was instrumental in raising over $2 million in 2015 and 2016.

In addition, Ms. Jazi Chehab is an active member of the Foreign Policy Association Off-the-Record Lecture Series and the United Nations’ Women’s International Forum, as well as several other professional organizations.