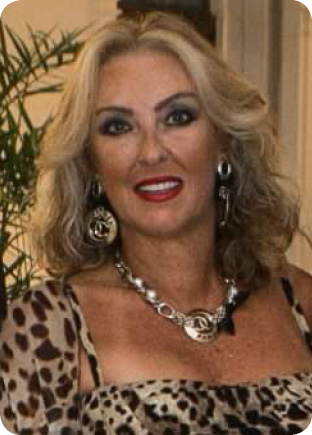 Rima Otrakji is currently the Vice Chair of the Rene Moawad Foundation, USA. She formerly served as President of the AUB South Florida Chapter. Rima is the owner of Rima’s Gifts, a retail personal shopper boutique located in Coconut Grove. Her love for fashion and education made her a supporter and a member of the host committee and chairperson for three years of “Fashionably Conscious”, supporting the Coconut Grove cares and the Barnyard. She is also a volunteer at the American Institute for Cancer Research. In addition to that, Rima is the Vice President of “Miami Living”, a company that owns and manages Real Estate.

Rima Moussallem Otrakji was born in Beirut, Lebanon, where she graduated High School from College Protestant Francais. She studied in London and Paris for a few years during the Lebanese war. She attended the American University of Beirut and graduated with a Bachelor’s degree in political science and public administration and a minor in education. Rima was active at AUB by being member of the Music club, fundraising through live concerts for AUB and vice president of the Lebanese heritage club.

She attended Georgette Gebara’s school for classical ballet from age four to nineteen. She taught French at College Louise Wegmann in 1984 and 1985. Rima is fluent in four languages: Arabic, French, English and Spanish. She studied classical guitar and plays competitive Tennis.

In 1985, Rima married Dr. Christian Otrakji and moved to Miami where she had two beautiful daughters, Natasha and Danielle. She was and still is active at their school, Carrollton School of the Sacred Heart, where she chaired Annual Giving and Major Gifts committees for fourteen years. She is a substitute teacher there and also teaches French privately.

Rima cares about the environment and supports education. “Keeping the environment clean and sustainable and educating the new generation will secure a better future for them”. When approached to be a board member of the Rene Moawad Foundation, Rima found many goals in common. She has been chairing the Miami Benefit dinner, which is a major fundraiser of RMF, for ten years and is proud to serve on the board of such a noble Foundation for the past 15 years.

“Less fortunate children deserve a chance to have a better future” and she believes that she can make a difference by opening her heart and helping them achieve that goal. “Education should not be a choice”, she says, “it should be a requirement in order to live in a better world.”