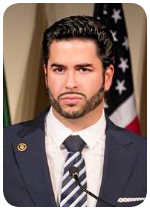 Amin G. Salam is the Vice President for Business Development for the National- U.S. Arab Chamber of Commerce (NUSACC). His focus is on building sustainable bridges and bilateral business and economic relations between the United States and the Middle East and North Africa. Prior to joining NUSACC, Mr. Salam served as an international lawyer at the offices of Shearman & Sterling LLP, where he started his career as a corporate lawyer.

Mr. Salam has over 15 years of experience in international affairs, international trade matters, and general public policy issues and has demonstrated his expertise in nurturing public and private sector relations around the world, with an emphasis on the Middle East and North Africa (MENA) region. His broad professional experience in the MENA region and the United States, and his expertise in both business development and legal practice, have provided the background necessary to develop new lines of business and expand strategic partnerships with diverse industries around the world.

Mr. Salam has extensive experience dealing with governments and major private sector stakeholders across the MENA region. He developed and maintains international networks and alliances with all of the countries in the Arab World, and is in direct contact with Ministries, Investment Authorities, Tender Boards, Chambers of Commerce, U.S. Embassies, and business communities. In his current position Salam has established critical partnerships with high-level industry leaders of Fortune 500 companies in sectors including energy, aviation, defense, technology, telecommunications, health Care, and education. He also advised U.S. global companies on business development strategy, government relations, corporate social responsibility projects, political risk, and legal frameworks. Mr. Salam established strong networks with the U.S. Government agencies responsible for trade and investment promotion including OPIC, USTDA, EX-IM Bank, World Bank Group, and U.S. trade industry associations. He has often been recognized by U.S. Government agencies for his work to strengthen and develop economic and trade relations with the MENA region.

In 2011, Mr. Salam was appointed by then-Governor O’Malley of the State of Maryland to serve on the Governor’s Commission on Middle Eastern American Affairs. In that capacity, Mr. Salam is working closely with the Governor’s office and the Department of Business and Economic Development to strengthen commercial and economic ties between the State of Maryland and the Middle East and North Africa.