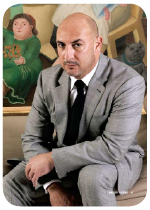 For over 35 years, Gary Nader has been regarded as one of the most entrepreneurial and successful gallerist in the world.

From his early career as the Director of Nader Gallery of Santo Domingo in the Dominican Republic in 1981 to his move to the United States to set up a gallery specializing in Latin American Art in Miami in 1985, Gary Nader has been determined not only to establish himself as an expert on Latin American Art, but to disseminate information about this recognized and exciting area of art to expand the horizons of his artists and collectors. To do this, Nader has established several significant art projects and publications, and he is still exploring other possibilities to enhance his profile and that of the art he believes so strongly in supporting. The opening of Gary Nader Fine Art in Coral Gables in 1992 was another step in expanding his role beyond that of a mere gallery director interested in the commercial sale of art.

In 2014, Gary Nader announced his intent to create a world class Latin American Art Museum in the crossroads of the Americas. The Latin American Art Museum aspires to be the most important venue in North America to showcase acclaimed Latin American Art and will be fully dedicated to foster knowledge by a continuous process of appreciation and reinterpretation of Modern and Contemporary Art from Latin American and its diaspora. Through a permanent collection of paintings, drawings, sculpture, photography, installations, and other media, in addition to itinerary exhibitions, the museum’s audience will experience and appreciate what is one of the world’s most significant regions of today’s Contemporary art scene.