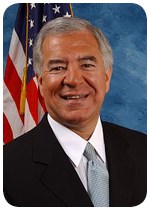 Former Congressman Nick. J. Rahall is Senior Adviser at Cassidy and Associates in Washington. D.C. As a Former U.S. Representative, Nick Rahall represented West Virginia’s Third Congressional District. He served as the Ranking Member on the House Transportation and Infrastructure Committee, and also served as Chairman of the House Natural Resources Committee from 2007 to 2011.

First elected in 1976, Former U.S. Representative Rahall served nineteen terms in the U.S. House of Representatives and is recognized as one of the youngest-elected, longest-serving members in the history of the House. As the longest serving Member of the House Transportation and Infrastructure Committee, he was a leader in every Federal Highway debate since coming to Congress. Nick k Rahall worked to build and repair the nation’s highways and bridges, improve and modernize airports, and provide critical water, sewer systems and flood control projects throughout West Virginia and the Nation.

Rahall’s Chairmanship of the Natural Resources panel afforded him the chance to work on issues close to the hearts of many West Virginians—such as preserving the State’s rich coal history and jobs, expanding tourism opportunities, protecting hunting, fishing, and other recreational activities; and safeguarding the state’s special places for future generations to enjoy. He strived to honor the Committee’s charge of serving the natural environment, wild lands, scenic vistas, fish and wildlife, tribal Indian sovereignty, and the American public.

Born and raised in WV, Rahall is of Lebanese descent, whose grandfathers emigrated from Lebanon to the Mountain State selling linens as pack peddlers. Always advocating U.S. best interests first, he has traveled the Middle East extensively meeting with all sides urging peace, protection of innocent lives and recognition of all human rights. He has received both the Philip C. Habib Distinguished Public Service Award 1993 and the Najeeb Halaby Public Service Award presented in 2004 by Queen Noor of Jordan.

Rahall is married to the former Melinda Ross of Ashland, Ky. He has three children, Rebecca and her husband Michael Parker of Castle Hayne, NC, Nick Joe III, and Suzanne Nicole and three grandchildren. Before Congress, Rahall served with his late father in the business world in Rahall Communications Corp., and as a top aide to his lifelong mentor the late U.S. Senator Robert C. Byrd.