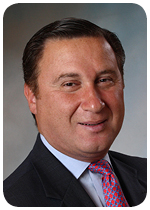 Jay Ghazal is Founder of Ghazal & Associates LLC, a strategic and international governmental affairs firm based in Washington, D.C. Mr. Ghazal represents a wide range of clients before Congress and the Administration. With 30 years of experience as both a Capitol Hill veteran and federal lobbyist, Mr. Ghazal has developed professional relationships with a number of key decision makers in Washington, D.C and numerous foreign governments.

From 1985 until he founded the firm in 1997, Mr. Ghazal served as a senior policy and political advisor to Senator Claiborne Pell, the former Chairman of the Foreign Relations Committee. Fluent in Arabic, Mr. Ghazal has traveled extensively through the region including the Levant, the Gulf, North Africa, and Central Asia. He takes pride in the fact that Senator Pell was a longtime friend of Lebanon who served as Founder and Honorary Chairman of the Save Tyre Committee, and championed the cause of peace in Lebanon including his efforts to lift the travel ban as well as efforts to assist Lebanon, its people, and its academic and social institutions.

More recently, Mr. Ghazal served as an international election monitor, including the Lebanese Parliamentary elections in 2009 and the Jordanian Parliamentary elections in 2010. As an observer of developments in the region and someone knowledgeable about Washington and Congress, he has appeared on Middle Eastern television to explain US policy and politics, most recently on Al Arabiya. He also serves as President of the American Task Force for Lebanon’s Legislative Council.

Mr. Ghazal resides in Arlington, Virginia with his wife and their two children.