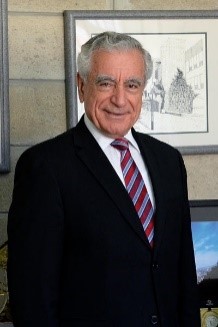 Dr. Jabbra served as the President of Lebanese American University (LAU) from 2004 till 2020. His presidency is remembered as one of “Servant Leadership par excellence”. His extensive experience in fundraising and strategic planning launched the University onto the path of expansion and institutional and academic renaissance. He prepared the university to meet the highest academic standards to achieve accreditation from the NEW England Commission of Higher Education (NECHE).

Prior to his role at LAU, Dr. Jabbra served as Academic Vice President at Loyola Marymount University in Los Angeles, California and as VP of Academic and Research at St. Mary’s University in Halifax, Nova Scotia, Canada. During his tenure at LMU and SMU, Dr. Jabbra gained profound experience in academic administration. He served on and chaired over 100 academic committees and boards ranging from academic senates to boards of trustees. At both Universities Dr. Jabbra was fully engaged in strategic planning and fundraising.

In Canada he played a major role in the Maritime Provinces Higher Education Commission which accredits university and college programs. In the United States he was very active in the Western Association of Schools and Colleges (WASC). He always participated vigorously in the revision of WASC accreditation standards, and in the accreditation of American Law Schools for the American Bar Association (ABA)

Dr. Jabbra earned his law degree at the Université Saint-Joseph in Beirut, Lebanon and a Ph.D. in Political Science from Catholic University of America in Washington, DC. He is the author, co-author and co-editor of 12 books and published over 33 articles in scholarly journals, and 26 book reviews in both English and French and scores of scholarly papers and keynote addresses given at learned societies’ meetings and professional gatherings.