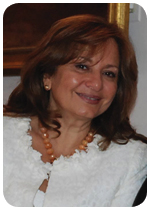 Nadia Abourizk-Asaad has been serving as the Executive Director of the Rene Moawad Foundation since its establishment in the US in 1993. She was involved in the setting up of the organization and establishing its board and its programs, which included annual conferences on issues relating to development in Lebanon. Prior to that she worked for two years at the Embassy of Lebanon in Washington, DC as Media and Public Relations Assistant to Ambassador Nassib Lahoud. From 1979-1991 she was Executive Assistant to Ambassador Clovis Maksoud at the League of Arab States. Nadia received her Masters in International Relations from the Center of Contemporary Arab Studies at Georgetown University.