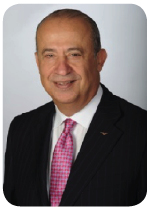 Tony Charaf is a high energy, results-driven Senior Executive. He has a demonstrated ability in governance, risk, and compliance matters, in addition to business operations at the Board and Executive levels. He is recognized for combining financial acumen and corporate management knowledge and leadership, while maintaining the highest degree of professional integrity and personal excellence. Tony’s ability to lead people, manage resources, and build highly profitable businesses distinguishes his career. Tony is a retired executive and a servant leader, who learned to inspire thousands of people around the world to love what they do and voluntarily give their discretionary energy to their company. In addition to visionary leadership, innovation, and technology, he still believes an inspired workforce who is loyal to leadership and understands the mission was and still is the most profound competitive advantage.

The following is a brief biography and a description of Tony Charaf’s life journey in his country of birth, Lebanon, and in the United States of America. Tony was born in April of 1947 in Zalka, Lebanon into a family of five siblings with limited means. He began working at the age of 13, while going to school full-time. He was raised in a home anchored not only by love, care, and honesty, but also in a home where he was encouraged to have a determination to achieve on his own with a clear understanding the world did not owe him anything.

In 1968, Tony graduated with a Technical High School Diploma in aviation from the School of Arts and Crafts in Beirut. At that time, finding a decent job in his field or going to university for more advanced education was non-existing. Hopelessness began to settle in until the opportunity of a lifetime became reality as Tony was offered the opportunity to travel to North America through the assistance of his sister.

Tony migrated to North America in 1971. He started working immediately at a gas station, while simultaneously going to school to transition his education from French to English. He was accepted at the Engineering School of University of British Columbia in Vancouver, Canada. He later transferred to Northrop Institute of Technology in Los Angeles, California in March of 1973. Tony would attend school at Northrop full-time while also working full-time at a car rental agency, washing cars and cleaning offices. He graduated Magna Cum Laude with an Engineering Degree in Aviation to be followed by a Master’s Degree in Management. He obtained his private pilot license in March of 1977. Tony also attended leadership programs at Harvard, Wharton, and Stanford University throughout his career.

Tony began his aviation career as a project engineer in 1977 with Pacific Airmotive Corporation in Burbank, California, a pioneering company in jet engine overhaul. In 1979, he joined Aviall in Dallas, Texas, where he held several positions in engineering, production, operations, and marketing. In 1989, he was named Vice President – Operations for Ryder Airline Services/Aviall. In November of 1996, he joined Delta Air Lines in Atlanta as the Director of Engine Maintenance. In November of 1997, he was promoted to Managing Director of Powerplant Engineering, and in February of 1998, he was promoted to Vice President of Maintenance Engineering for engines, components, and ground support equipment. Tony held this position until August of 2000.

Tony retired in December of 2014 from Delta Air Lines, and he immediately pursued an Executive Coaching Certification from Columbia University in NYC and Georgetown University in Washington D.C. He coached up to 5 CEOs until he decided to fully retire in mid-2017 after a 40-year career in the aviation industry and executive leadership coaching.

A sought-after speaker, Tony frequently presented the importance of inspirational, strong, committed, and visionary leadership. He has been a moderator, panelist, and Master of Ceremonies at many conferences. He is also a recurrent lecturer at the MBA program at the Goizueta Business School at Emory University. Tony also sits/sat on several non-profit organizations, including St. Jude Children’s Research Hospital, The Carter Center in Atlanta, The Winship Cancer Center in Atlanta and The Red Cross Life Board. Tony and his wife, Samira, of 36 years have raised three wonderful children, who reside in the Atlanta area.